We all heard about McDonald's supposedly 33% increase in foot traffic via a very small $1,000 foursquare campaign. Thousand of people tweeted it, and many so-called social media experts jumped on it like hungry sharks. But, it also didn't take long before more serious people started to question the result. 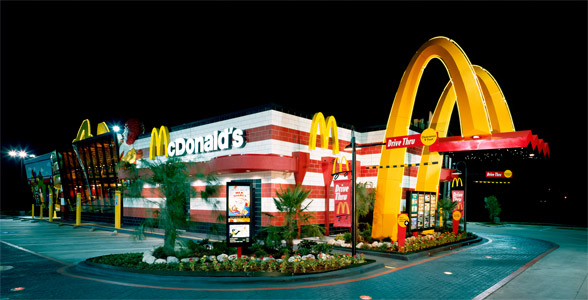 One of the first ones to speak out was Olivier Blanchard (@thebrandbuilder). He tweeted:

Later the same day he posted a very good analysis of the real Social ROI in the article "What McDonald's got wrong about Foursquare, Social Media strategy, measurement, and ethical reporting." An article that is a must read for anyone interested in Social ROI.

The underlying problem is that McDonald's have about 26 million customers per day, meaning a 33% increase equals 7.8 million foursquare users. But, Foursquare has only a total of three million accounts (and only one million active users). You don't have to be a math wiz to see that something is wrong.

So what did happen on April 16, 2010? The day of McDonald's foursquare campaign? I reached out to Rick Wion, McDonald's Director of Social Media, to get the real numbers, and the real story.

Here are the facts:

On April 16, 2010, McDonald's used 100 randomly awarded $5 and $10 giftcards as check-in bait to lure in potential diners - via Foursquare. The result of which you can see in the graph below.

Before the campaign, McDonald's had an average of about 2,000 check-ins per day, on the day before the campaign they had 2,146 check-ins, followed by a spike of 719 check-ins - or 33.5% - a number that then quickly drops back to "normal" only 3 days later. They also saw more than 300 tweets mentioning the campaign. 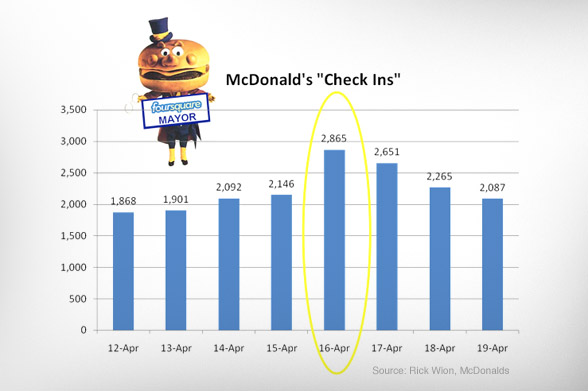 They measured this, as Rick tells it, by "indexing the amount of check-ins across all McDonald's restaurants in the days leading up to the pilot and then on the pilot day itself. While a check-in isn't the same thing as foot traffic or sales, it does show an increased level of engagement with our brand and that social media can be used to drive folks into our restaurants."

In short, McDonalds did get a 33% increase, but was not in foot traffic overall, It was a 33% increase in check-ins by people using Foursquare.

In terms of overall foot traffic, Foursquare check-ins only accounted for about 0.011% of their customers that day, up from 0.008% the day before.

In terms of exposure, it was both a success and a failure. Most of the press gobbled it up like candy, and provided McDonald's with a huge amount of free advertising worth much more than the $1,000 put into it.

But in terms of tweets then McDonald's claim that nearly 600,000 people potentially noticed it via Twitter, and still only 719 people reacted to it. That is a conversion rate of 0.12%, which is below most click-trough rates of website banner ads (not very impressive).

Another thing was that this entire campaign wasn't a part of a long term social media strategy. It was a test by people who hadn't used Foursquare before, and who wanted to see whether there was anything in it.

Update: Rick Wion comments (by email) that "tests like this are part of our long term strategy. We need to test to understand what works at the store level to understand the scaling issues."

As Rick puts it:

This kind of program was uncharted waters for us, so we needed to develop a means of measurement that translated to other commonly understood metrics within the McDonald's system. [...] I think, the entire location based services area holds great promises for all businesses. I am a big proponent of conducting pilot programs and then evaluating the results to help guide the development of a more wide-reaching strategy.

They also didn't measure changes in transactions or sale. This was strictly a Foursquare test to see whether it could bring in more people.

There are many things we can learn from this:

1: Spending a $1,000 to do an "effect" test that results in a short-term increase of 33%, is interesting and definitely worth taking to another level. They proved that they can influence people's behavior, using Foursquare, and that this might be a way to increase both sale and traffic in the future.

2: Measuring Foursquare check-ins, but not comparing it to the actual foot traffic, doesn't give you any real answers. It gives you an indication, but you don't know whether the extra 700+ people who checked in were merely existing customers (who previously hadn't thought of checking in), or new customers attracted by the free price.

3: I don't think contest or freebies are a good way to use Foursquare. It often attracts the wrong people (as in people who are not really interested in your brand, but just want a freebie, before they go back to where they used to shop). I think the real power of location based services is to focus on creating long term commitment and loyalty.

4: Big companies, like McDonalds, have a huge problem because everyone already know they exist. When a small unknown company advertises they bring in a lot of new customers, some of which might stick around. But, when big brands advertise, they are reaching out to people who already know them, and have already decided if they like them or not.

We see this all the time with other brands like Coca Cola, Ikea, Wall-mart etc. People are not going to buy more Coca Colas just because they see an ad. Existing customers are already buying Cola's, they have no need to buy more - and non-costumers have already decided not to drink it. The only thing big brand advertising campaigns really do, is to keep the status quo. And the same goes for their social media efforts (when used as a marketing channel).

You might possibly be able to change this, if you stop marketing, and focus on changing why people connect with you. But, for big brands, even that is an almost impossible task.

6: As Olivier Blanchard would say, nothing is real unless it generates an actual return of investment - as in money on the table. Check-ins, foot traffic, tweets, or cars parked outside in the parking lot are completely irrelevant until they give you actual money. So the next step for McDonald's is to crank up their metrics to cover the full impact of the campaign - including measuring transactions and revenue.

7: I agree with Rick Wion that Foursquare, and location based services generally, is very interesting and worth exploring - especially for a company like McDonald's with a heavy retail footprint.

8: There is nothing wrong with experimenting, that is how you learn. And I am sure McDonald's learned a lot from this experience.

Was it a success? No. But as a test, and as away to get started with Foursquare, then yes/maybe. It really depends on what they do next.