98% Can't Identify With The Newspaper

Amedia, the (second) largest media group in Norway, did a study about relevancy among young people.

What they found was that only 6% agreed that the newspapers were bringing relevant news. And only 2% could identify with the newspapers' image of youth.

Young being people under 40 which is telling in itself. Most other industries define youth as people below 25.

And this is despite that newspapers in Norway have a much better connection with their readers than most newspapers in other countries. The Norwegian newspaper market is a lot stronger than in the rest of Europe and the US.

So if 98% of your potential customers can't identify with your product, and if 94% don't think it's even relevant, the chances of you being able turn them into subscribers are... zero.

This follows several other studies, like a study from October 2012 that found:

The problem here is the editorial focus. The newspapers are simply not making the right kind of news. And as Amedia wrote, "How long are they going stick around if we do not create the content they need?"

That is a very good question, but perhaps one with an obvious answer.

And, this is not just a problem in Norway, it is a problem everywhere. For instance, yesterday morning I went to one of the big national news sites in Denmark, and one of the front page stories was that a train had hit an elephant in India.

This would not even be relevant news for most people in India.

Not only that, but when you click on the article, you find that it's just 177 words plus a picture, the classic cheap format written by a news agency.

Why are they posting this? Why would I engage with it? ... and more to the point ... why would I pay for it?

If I were to create a list of the top 5 things newspapers have to solve, it would look like this (in this order):

In short, trust is what people feel when they know they can count on you to do the right thing, for them.

Relevancy is also an editorial decision, but in a slightly different way. And it is an element that involves the most dramatic change.

Think of it like this. If you were stranded on an island, disconnected from the rest of the world, and you were limited to only one news source per day, which would that then be? 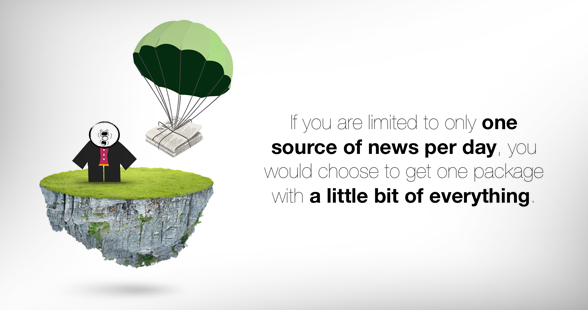 The answer is that if you are limited to only one source, most people would choose to get one newspaper with a bit of everything. This way you would still be kept informed, despite the lack of depth.

However, if you are connected, you wouldn't choose only a single newspaper. Instead, you would choose a mix of the best content from the best sources.

The problem newspapers have is that they are the jack of all trades, but master of none.

Why, for instance, would I want to read about a new product from Amazon in my local newspaper? The journalists working there doesn't have the expertise to cover that topic, and as a result they end up just paraphrasing the press release.

And that type of news simple isn't relevant in the connected world. We want to know why something new is important, not just that it is new.

However, newspapers do have their strengths For instance, newspapers have always been good at covering politics. The problem with politics, though, is that while it is important, it's also involves a lot noise and pointless activity (by both the politicians and the media convering them).

Another thing the newspapers are good at is to cover day-to-day events, like traffic accidents or crime. The problem with those articles is that, well, I wouldn't pay for them. In a world of abundance, people like to pay for things that can help them... or for things that are entertaining (which is why we have celebrity tabloids).

People don't like to pay money for articles that make them sad and uncomfortable... like daily articles about people getting assaulted, especially not when the world we live in is an extremely safe place.

For instance, one of the largest newspaper in this country, wrote 3,840 articles about people getting murdered in 2012... or more than 10 per day.

Is that really relevant to people's daily life? Is that why people should buy a subscription?

We have to remember that what people paid for in the past was a 'package of news'... not the articles. But in the connected world, the focus has shifted to the value of the individual articles.

To be relevant, you have to redefine what it means to be a newspaper. You have to shift your focus from creating a random package of random news, to be about the relevancy of the articles themselves.

This is also how social media works. Nobody shares a newspaper. But many share individual articles.

One of the reasons why I like to read AllThingsD is because of Kara Swisher, Peter Kafka, and Liz Gannes. And the reason is that their niche also makes them relevant as journalists for me to follow.

See the problem? She is a great journalist, and she is doing a great job, but why would people follow her when what she writes about is one random thing after another?

And this is the problem with newspapers. Because of the focus on being the 'jack of all trades, master of none', both the newspaper and its journalists are not someone you would follow.

If you want to connect with people and get them to follow and engage with you, a wide and generalized focus is your enemy.

In many ways, the connected world is to print what print was to the stone tablets. It's just how things are done these days because it more flexible, powerful, scalable, extendable and convenient.

Of course, the connected world is about much more than just a change in format. It dramatically changes how we interact with things.

I wrote about several of the problems in 'The Shift from Single Consumption to Multi Consumption Behavior' and 'Rethinking the Perfect Media App'.

Embracing the world of 'multi' is absolutely critical. It won't help you gain your readers trust, and it won't make your articles more relevant. But without it, you won't have a format that is convenient for your readers to engage with.

Being 'multi' is like the power-steering in your car. People can drive without it, but they will hate it every single time they have to make a turn.

See also: The Real Mobile Shift - For Publishers ... where I go into much more detail about what it means to be truly mobile.

The point is that the newspaper industry is in an existential crisis. And this is not something you can solve with an iPad app or by going digital. To succeed you have to redefine the very definition of news.

The ones who are going to be hit the hardest are the local newspapers. Because on one hand, most of the news they bring are unique because it is local. But on the other, most younger people don't really care about local news.

Local news is kind of boring. And while it is interesting, it's not very relevant... and unlike the national newspapers who can focus more on news as a form of entertainment (although they will never admit that), local newspapers can't look elsewhere for entertaining topics to cover.

In a world of abundance, younger people would much rather spend half an hour on one of the many far more exciting sites online, than read about a fire at someone's house, of whom most of them don't know.

So what is the solution?

One thing you could do is, instead of focusing on being the bringer of news, you focus on being the creator of communities. If someone opens a new shop, you take on the role of trying to help them be successful. If the local sports club have a new plan, you use the newspaper to help build up support.

In other words. The role of a local newspaper is not to be the bringer of news, but to be connecter of people and interest. You find things people care about, and then you help them make it better.