When Will The Media Learn That Content Spam is Just a Gimmick?

(Please note, this is a rant.) Yesterday, as I was sitting down to get something to eat after a long day of writing, I turned to Twitter to see what was new. And what I found was that several people in the media were talking about this: 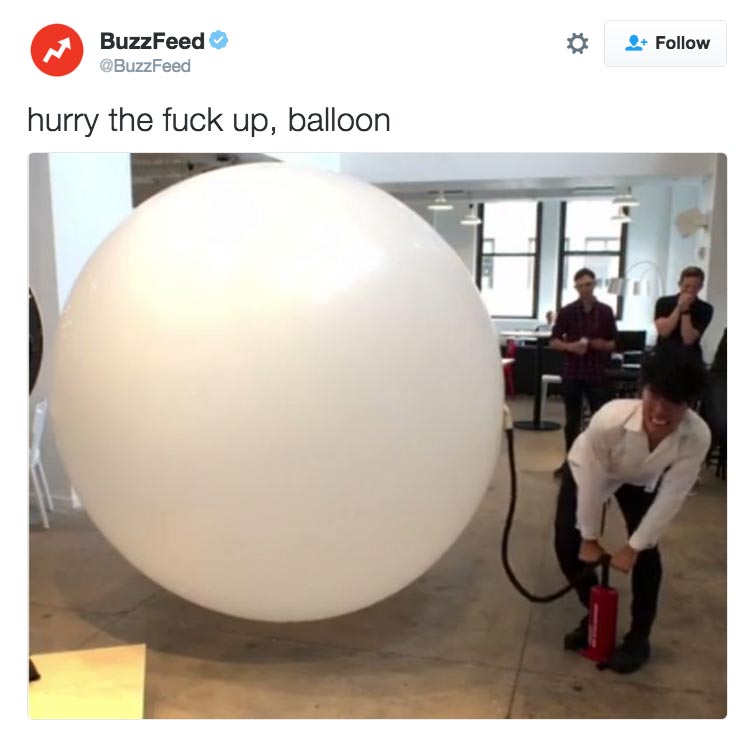 Yes, this is another completely idiotic live video from BuzzFeed, this time trying to blow up a balloon... and failing. After one hour and twenty minutes, they had to poke it with scissors to get it to pop. And then, when it popped, absolutely nothing special happened. It just looked like any other balloon popping.

At that moment, every single person who had tuned in to watch this realized that they had been completely and totally wasting their time (you can check the last minute of it here if you, like me, absolutely didn't want to watch the whole thing).

Firstly, I'm annoyed by those in the media that are having BuzzFeed envy based on something that is basically just content spam.

BuzzFeed Video is rapidly racing to the bottom of the lowest pit of content possible, and it's only a matter of time before people have had enough of it. It's fun for the first few times, it's silly and people are bored. But get to the 10th time, and even the dumbest person starts to realize maybe there is something else on the internet. Don't believe me? Look at the history of shallow types of content online. They have a life-span of about six months to a year.

And if you still don't believe me, here is the video BuzzFeed Video published after the one about the balloon... about popping pimples. And no, I won't link to it.

This is not the future. It's not even the present. It's content optimized crap, taking advantage of the shortest moment possible.

Secondly, and perhaps even more important, what BuzzFeed did yesterday was just another copy/pasting of other people's content.

Here is a video that the very popular Slow Mo Guys posted one hour before BuzzFeed decided to do the same thing. And unlike BuzzFeed's video, which was just a bunch of crap, the Slow Mo Guys video is (kind of) amazing.

Okay sure, it starts out pretty silly (and some might even say stupid) as well, but then wait until 5:30 into the video when they turn on their high-speed cameras. Not only does the balloon pop while a person is standing in it; the 'reveal' is of superhero proportions.

Take a look yourself.

So, BuzzFeed took this concept, removed all the value from it, and just wasted people's time. When they cut the balloon, it just went 'pop' and then the show was over.

And this isn't the first time either. Remember the 'exploding watermelon' BuzzFeed did a few weeks ago? Yep... that was the same anti-value concept. They wasted an hour of people's time placing rubber bands around the watermelon, and then when it finally 'exploded' it was just 'pop'... oh, the show is over.

And this too had been created earlier by the Slow Mo Guys. This did this all the way back in 2012... and their video was much more amazing.

And here is the real point of this. If you head over to the Slow Mo Guys' channel, you will find that they have at least as much traffic as BuzzFeed has with its videos.

So, as a publisher, you have a choice. You can either try to create entertainment like BuzzFeed, which is based on short term content spam, which has no value. Or... you can be like the Slow Mo Guys, which is funny, also a bit silly, but often ends with something amazing.

Or... you can take that a step further and you can head over to Derek Muller's channel 'Veritasium', where you can find amazing videos about science! And he too is getting as many views as BuzzFeed.

Thus, I give you three choices.

Each one of these choices will provide you with the same type of traffic levels, so which one do you want to be known for? When you look at yourself in the mirror in the morning, which type of publisher do you want to see?

And we have had this discussion before. Back in 2015, there was a discussion about live views from people watching NFL online compared to the real TV ratings, as reported by IBT.

Yahoo claimed that NFL had 15.2 million online views, by people who just happened to see the video when they were visiting their Yahoo NewsFeed. But then CNN's Brian Stelter ran the numbers and only got to 2.3 million people.

CNN's Brian Stelter crunched the numbers of the NFL live stream based on total minutes, and reported that, by those metrics, the game averaged 2.36 million viewers, a figure confirmed by an NFL spokesman.

In other words, one TV view is comparable to 6.5 online views. So when Peretti says BuzzFeed had numbers comparable to TV, he is actually not even close.

It's the same when you compare a Facebook view and a YouTube view. They are not even remotely comparable.

Granted, that study was about Yahoo, and it was based on just one event. And we can argue about the validity of Brian Stelter's analysis. But, as I wrote in my article about the real future of live video, even the live streaming services know that their metrics are crap. Here is what Periscope told Mashable.

The reason why we care about time-watched per day as a measure of success, the reason why it's the number one metric we look at is because it's the best articulation of whether people are getting value out of Periscope.

"It's not about how many users have our app on their phone. It's about, every day, how much time are people spending watching live broadcast.

"It's not even enough to say how many viewers there are because, say, 10,000 people could watch my broadcast for one second and that's not particularly interesting. That's not a good broadcast. But if we're looking at the number of people watching and how long they're watching, we aggregate that together? Now that's an interesting metric. That's what we call 'time watched'.

There is absolutely nothing that indicates that what BuzzFeed is doing is the future. In fact, everything they are doing is firmly based on the shortest definition of the present possible. Every single article they post is a throw-away article, optimized for whatever it is that is hot right now.

The only thing BuzzFeed is good at is building scale and always adapting to the latest gimmick. And, true, that is pretty amazing. They are very good at constantly changing.

But look at the Slow Mo Guys or Veritasium. They have been doing the same thing for five years, and yet they are still winning. They also have millions of views for each video, just like BuzzFeed.

As I said, you have a choice of what publisher you want to be. So which one do you choose?