On Tuesday we had a short discussion over at Twitter about what killed the newspapers (or what killed their ad revenue). It started with Ben Thompson who posted this graph. 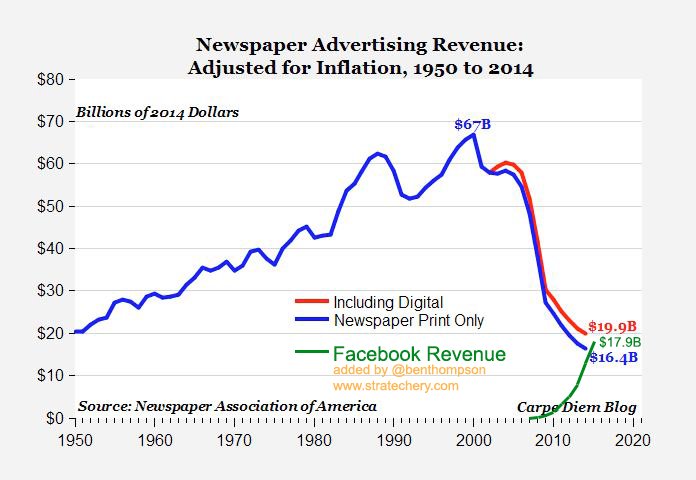 This is not a new graph for anyone in the industry. It has been the go to graph to illustrate the future trends for newspaper ad revenue, and I have used it in many of my articles.

But what Ben added was the revenue graph from Facebook, tweeting:

And I absolutely agree. Facebook might be growing really big, but it was not what killed the industry. So what did? Well, another smart person, being Jack Marshall, asked:

I looked up those numbers and added them to the graph: 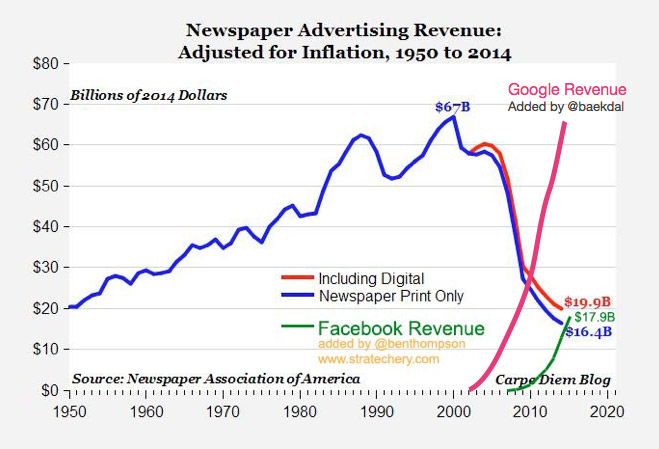 Now we see the real culprit. In fact, if you combine Google and Facebook together, you see that the upward trending line (since the 1950s) is still continuing today.

I want to make an important point, though: Google didn't actually kill the newspaper advertising market. Google replaced it with an entirely different market. It's the same money, but Google isn't in the same market as the newspapers. It instead created its own market and brands decided that was a better place to be.

If we look at advertising in newspapers, they are almost always based on creating random exposure for people with no specific intent. You flip through the newspaper, not really knowing what will be on the next page, and there you find an ad for some random brand.

In the past, this was pretty much how all advertising was done. It was low-intent exposure.

Google Search, which is how Google makes most of its money, is nothing like this. Google Search is instead based on advertising to people when they are specifically looking for something. This is what Google Search ads are all about. They are for when people are looking for a new blender, a bicycle rack or anything else you can image.

This is an entirely different form of advertising. It's based on a specific need that people search for. Meaning it's based on high-intent exposure.

This is an incredibly important distinction to understand. Google isn't winning because it's big or that it has so much more scale. It's winning because it created a way for people to have high-intent moments, which brands can reach with their ads.

This is the reality today. It doesn't really help to complain about Google, because you don't offer an alternative. If the media industry wants to get some of this money back, you first need to design high-intent moments for your readers and advertisers. That's the only way to compete with Google.

Facebook, on the other hand, is doing exactly the same as newspapers. The way advertising works on Facebook is exactly the way it works in newspapers. Here you have a NewsFeed with random stories that people look through. And within this feed you happen to come across random advertising (vaguely targeted to you).

This is (again) low-intent advertising exposure.

Facebook is competing directly with newspapers within the same type of advertising market. But this is not the market Google is in (well, except for YouTube).

The newspapers and Facebook are in the low-intent advertising market. It's a market that Facebook is currently winning because of its scale, but also because of better targeting and generally a better 'mood'. It's far more relevant for a brand to advertise when people are having a good time than it is when they are reading about someone being murdered.

If the media industry wants to regain some of this marketshare, you either have to design a better editorial profile and advertising product for each of these markets... or create a third market where you can really shine.

And doing that is a far more relevant discussion to have than 'what killed the newspapers'.