There is so Much Positivity in the Digital World of Media

If you have been reading Baekdal Plus for couple of years, you might have noticed an increasing level of frustration about traditional publishers compared to digital native publishers.

This frustration is not based on dislike. I love traditional media companies, and there is nothing I want more than to see them become massively successful in the future.

My frustration, however, is that, within many traditional companies, there is a kind of media bubble that is preventing meaningful change from happening, along with a growing sense of despair that is leading to an ever more negative editorial focus.

At the same time, I'm working with the digital native publishers, and here everything is different. The focus is generally much more optimistic, it's entrepreneurial, and forward looking.

Let me give you an example:

In traditional media, I constantly come across negative articles like this one. 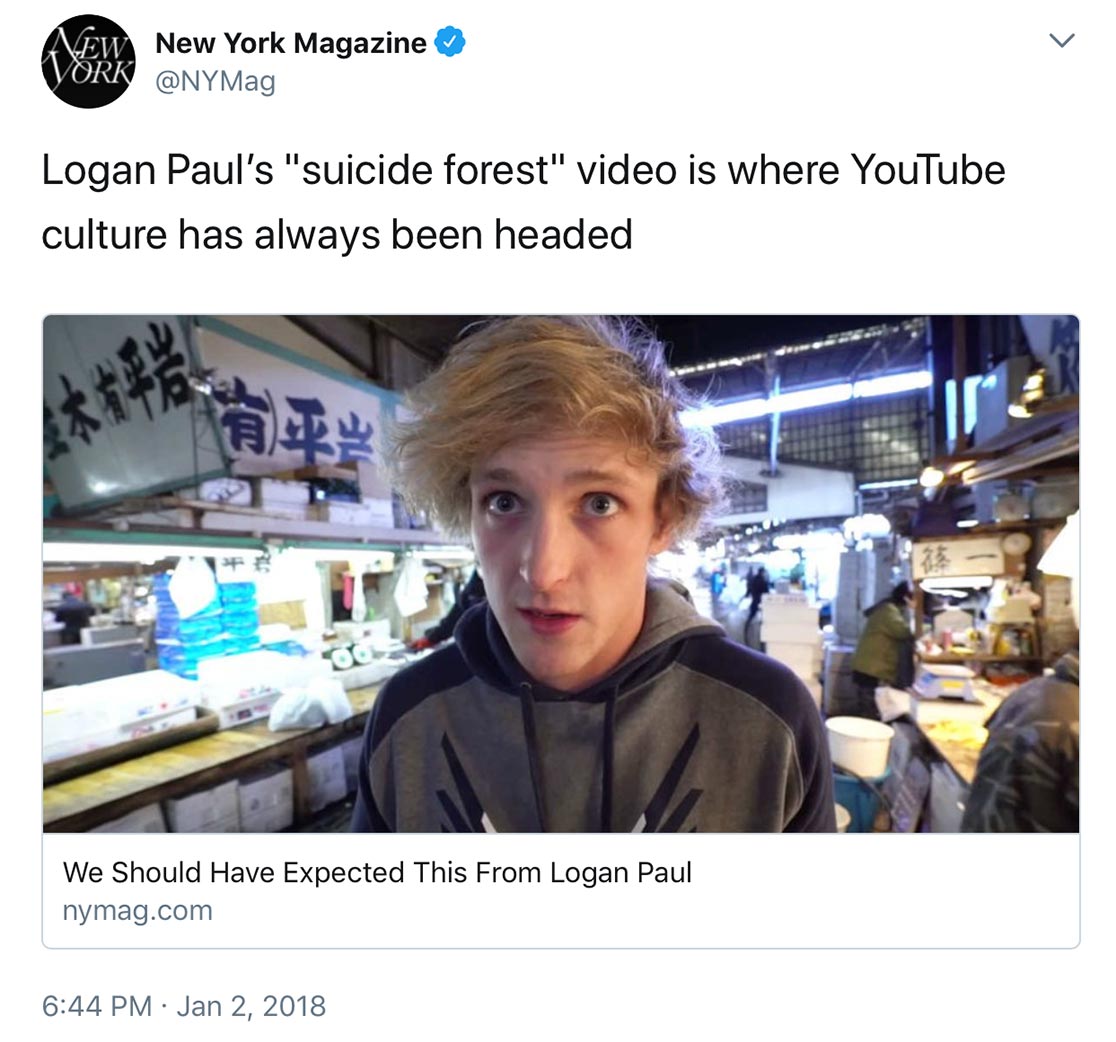 The problem here isn't that the news isn't important (it is). What Logan Paul did was extremely idiotic. Instead, the problem is with the framing and overall negativity.

Try reading this article, and you are left feeling like the world is shit and we should all just be depressed about it.

This is the kind of content that I see every single day from traditional media. It's like watching a wall of negative stories.

Please do me a favor. Please watch all of them in full. And just notice the level of excitement and positivity that you feel from them.

This is just a small sample, but isn't this amazing?

We also see this difference in the way things are being talked about and reported, and it makes traditional journalists appear reactive, while digital natives appear proactive.

Many traditional journalists only write about things that have already happened, like when a YouTuber has done something wrong or when a politician is saying something idiotic. In other words, they are 'reacting' to the world.

Many YouTubers, however, have a proactive editorial profile. They are not talking about things that have already happened, but are instead inviting people to join them in exploring what will happen.

A simple example is to compare this article from The Washington Post:

To the video I showed you earlier from Fully Charged reporting about the progress and the future of renewable energy.

The former is reactive and negative while the latter is proactive and positive.

At this point, you might be thinking that I'm being ridiculous, and that I am cherry picking examples so as to make old media look worse than it really is.

And you are kind of right. I am doing exactly that, but this is also not the point. Because let me show you something.

My frustration around traditional media's editorial focus about is how it has grown increasingly negative over the years. In the 1990s, when I would read my morning newspaper, I didn't consider it to be either positive or negative. The stories covered each day helped me get informed about the world, and since I read all of them 'as a package', it didn't really affecting my overall mood.

Today, this is no longer the case. Today, people read news by dipping into individual stories, and when we do that, the focus of each story has a much stronger impact. And, at the same time, because outrage drives traffic, the negative stories are featured far more than the good stories.

So, while it's true that newspapers like the Washington Post also post a lot of good and positive stories, it's hard to actually find them because the negative stories are always more prominently featured (and shared).

Let me give you a simple comparison.

In my last article about journalists vs YouTubers, I looked at The Daily Beast, so let's compare their featured articles with what YouTube is showing me.

This is not scientific study, it's just a comparison between what I see every day.

So, what we are going to do is to compare the top 20 posts on each site, and categorize them into 'negatively focused', 'positive, but from a negative baseline', and 'positively focused'

In The Daily Beast, a staggering 17 out of 20 articles on the front page are negative (85%), with the remaining 3 being positive but from a negative baseline. 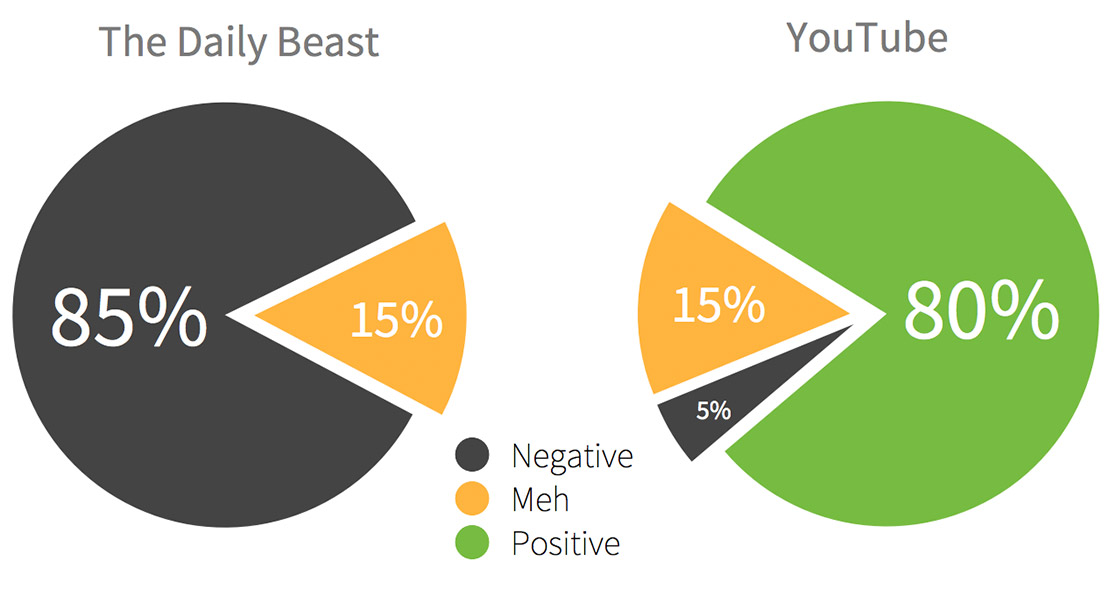 Yes, traditional journalists also write good things; and yes, there are also negative things on YouTube. But in my day to day use, there is an astonishing difference between the two.

And this is the source of my frustration.

Because think about this from the perspective of a future media strategy. You might be able to get more traffic in the short term by fueling the negativity and the outrage, and those stories might also be covering very important topics. But in the long term, reducing yourself to place of despair is a terrible editorial strategy.

This is less true for the big national newspapers who have enough scale to make negativity work regardless, but think about local newspapers or magazines.

A local newspaper with the same level of negative focus as The Daily Beast would create a terrible place for their local community to base itself around. And it's the same thing with magazines. Having a depressed audience is a terrible business strategy.

You can't just be negative. You also have to give your readers hope and invite them to join you on a journey into a better future.

And there is a better future out there. There is so much positivity happening all over the world every single day, and, generally speaking, the world is getting better. So be a part of that. Be an influencer of that.

Use 2018 to define it as an editorial analytics goal to change your rate of negative focus to something much better. I'm not saying you should only be positive, nor that you shouldn't cover critical and problematic issues. Those are important too. But at least make your editorial focus 50/50.

And also, when I say a positive focus, I don't mean a cheap viral snackable feel-good videos. Those are just crap. I mean, create stories that have a valuable positive impact on your audience. Real powerful journalism, covering very important things, but in a way so that it helps people move forward.

This is a better path for the future of journalism. Let's go that way instead!

The rising inflation and energy costs demands more of publishers.

Journalism is a vital part of society, but not all forms of news should be considered journalism

How to publish news for young people (advisory analysis)

Being relevant to young people is about much more than just TikTok.

Project journalism in the age of COVID 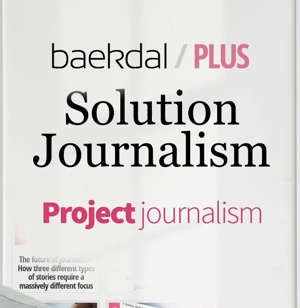 Why project journalism is replacing traditional journalism every time the public is directly involved in a news story.

trends:
An ode to journalism (and why I'm frustrated when we are not doing it)

trends:
How to publish news for young people (advisory analysis)