The Return of Bookstores? Uhm...

You might have noticed that the US book industry can't get their hands down at the moment. The reason is that the latest sales data from the US Census Bureau shows that bookstore sales are up by 2.6%. This is pretty significant because it's the first rise in sales since 2007. 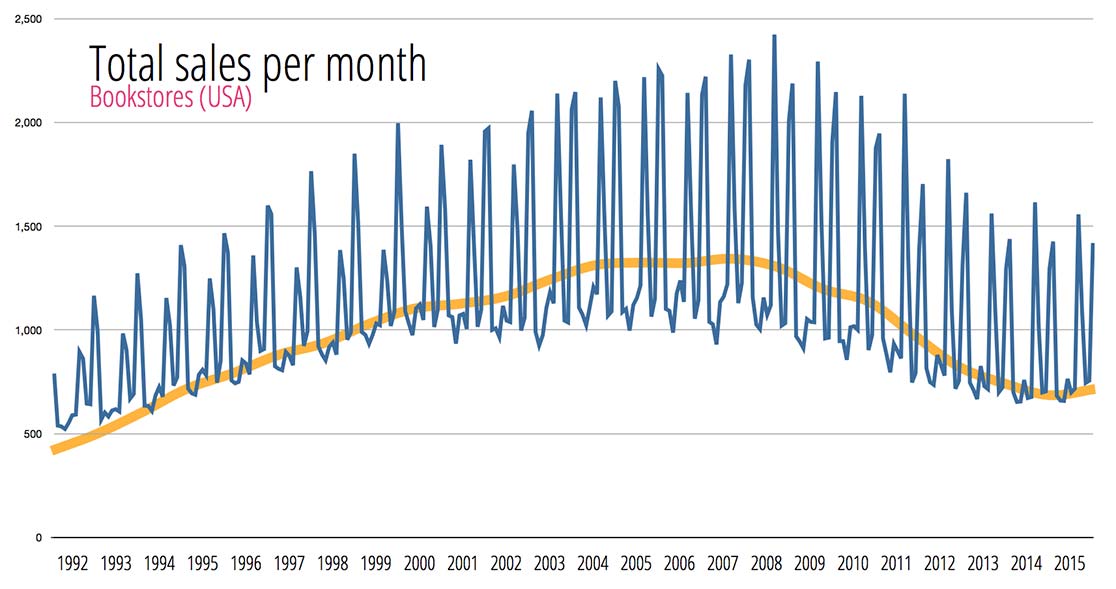 Of course, while it's a rise in sales, the outcome of the digital world is still pretty significant. Even with the increase in 2015, the total loss since 2007 has put bookstores back to 1995 levels. This is very similar to what we have seen with most other print markets (like magazines and newspapers).

This change is even more profound when we look at it in terms of growth. Here we see that the accelerating decline stopped in 2012, and the bookstores have actually been 'recovering' ever since.

This is pretty significant, right?

Of course, these numbers are a bit deceptive. While the book industry uses this data to say that print is coming back, that's not actually what these numbers say.

These numbers represent the total sales from business units categorized as a bookstore by the IRS, but we all know bookstores in general have branched out to more and more markets. For all we know, this increase in sales could be due to coffee, hobby and craft goods, or school equipment. There is nothing in this data that specifically says that print book sales is increasing.

However, we do see the same trend when we look at data specifically from the publishers. For instance, this is the outcome for the first three quarters of 2015:

And when we specifically look at ebook sales, we see that they have pretty much stopped growing for most of the traditional publishers. 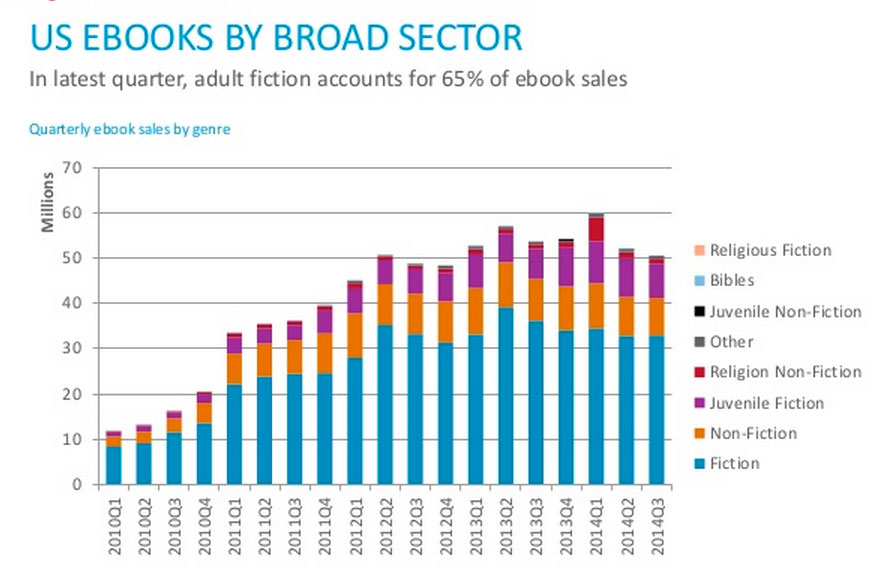 The reason I'm calling them the 'traditionalpublishers' is because none of this data includes the indie publishers or the self-publishers. This is a significant thing to keep in mind, because according to Author Earnings, traditional publishers represent a smaller and smaller percentage of the total market. 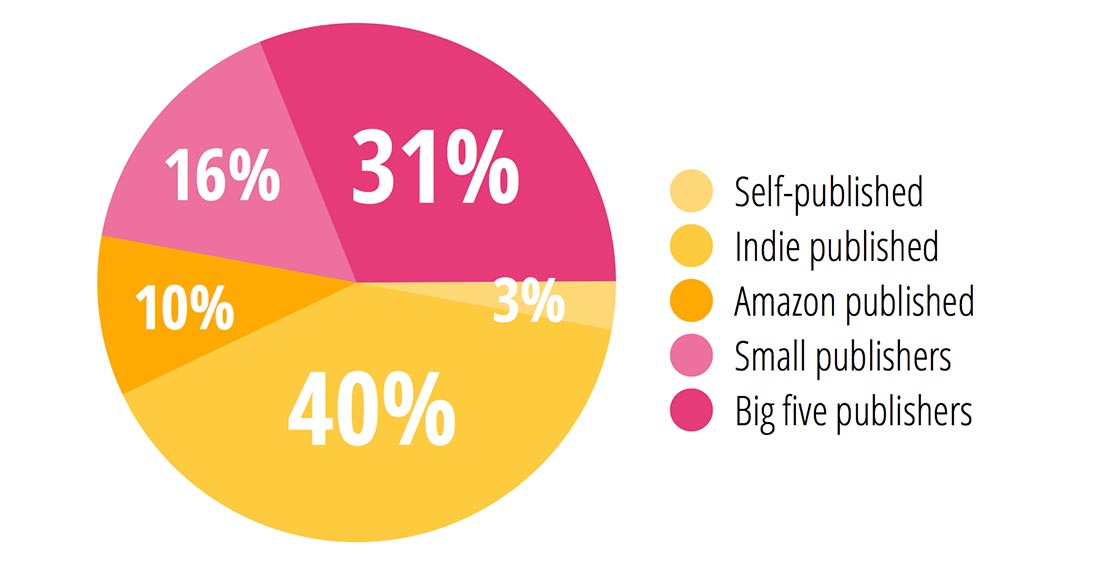 But let's talk why the print book market declined to begin with.

It's because of the financial crisis, right?

Most people in the publishing world blames this decline on the financial crisis, and attribute the 'rebounding of the market' to the fact the crisis is now over.

In some ways this is true. If we look at consumer confidence in the US, we see that it follows a very similar trend. It started to decline heavily in 2007, but since 2012 it has leveled out and rebounded. 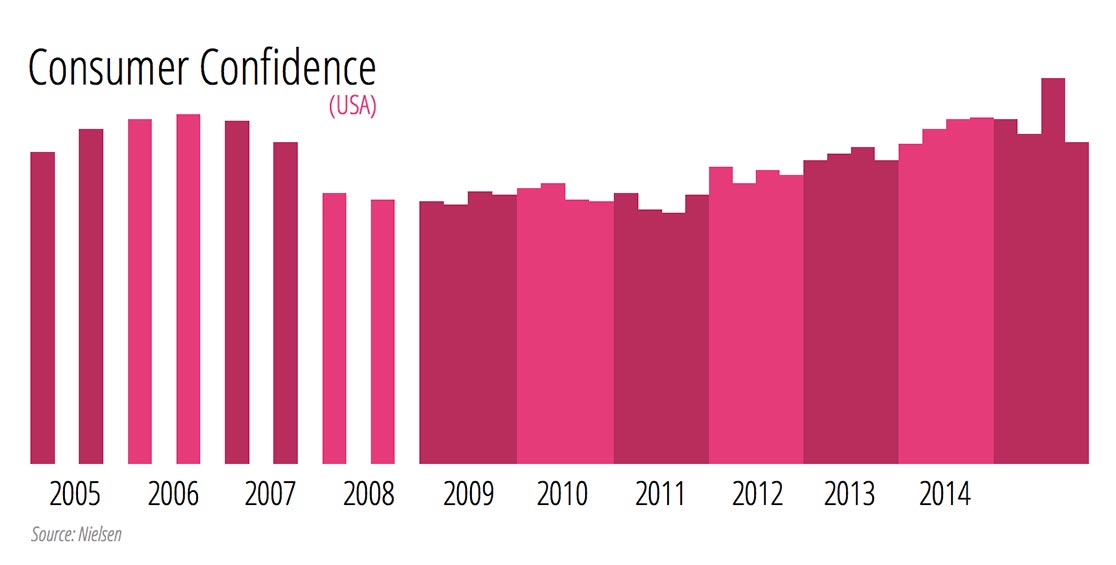 So this is it, right? The decline in bookstore sales was just due to the financial crisis and now that it's over, everything will be fine again?

While it's true that there are similarities between consumer confidence and bookstore sales, the reality is still that the overall sales are down 35% between 2007 and 2015. We are a long way from rebounding. In fact, we haven't rebounded at all yet. All that has happened is that we have stopped declining.

But this leads us to the question of whether we will rebound in the future. Will sales not continue to rise and get back to 2007 levels (and beyond)?

Well... probably not. You see, there are two problems.

The first problem is that the decline was not really caused by the financial crisis at all, it merely accelerated it. We see this when we look at the growth graph from before.

As you can see, the bookstore market has been growing less and less since at least 2005. That's two years before the crisis even started. But there is an even better way to see this, and that is by looking at consumer spending on books.

Here is the data from US Bureau of Economic Analysis, and as you can see, consumer spending on books has been dropping since the year 2000. That's seven years before the financial crisis.

So the trend started a long time ago, and there is nothing indicating that something is about to change dramatically any time soon. It may be that 2015 (for which we do not have data yet) will flatten out, but that still puts total spending on books at a very low level.

In comparison, here is what it looks like for audio/video consumption. It too is in decline, but the graph look very different than for books.

So, no. I don't see the return of books because I'm not seeing a change in consumer behaviors that would lead to such an outcome.

The second problem is the Kodak effect, which is a very common way to understand trends. Below is a graph illustrating how Kodak failed.

As you can see, leading up to the year 2000, Kodak was on a rocket trip to victory, but then came digital photography and Kodak started losing its dominant position. After a while, the decline slowed down and many analysts and industry professionals believed that the crisis was over and the Kodak might be on the path to rebounding.

But then came the iPhone... and Kodak just died.

This graph looks very similar to print, doesn't it? The bookstore had an amazing rise between 1992 and 2007 until it lost it all and went back to 1996 levels. And now it has stabilized.

The question now is whether the decline is really over, or whether it's just a temporary moment before the real crunch is happening.

The answer is currently inconclusive. We just don't know, partly because we haven't invented the replacement for books yet.

We thought the Amazon Kindle (released in 2007) and the iPad (released in 2010) would be end of print, and in many ways we were right. If you look at the graphs, the rise of ebooks caused a tremendous disruption in the market. Over just five years, ebooks grabbed 30% of the market.

But, like with Kodak and digital photography, the tablets didn't have what it took to fully disrupt the market, due to a whole slew of complicated reasons.

One of the reasons is that the usability of tablets is still not as good as with printed books. Both in terms of using the technology, buying and owning the books, and simply the touch and feel.

Another of the reasons is due to a lot of negativity surrounding tablets, from how the screen glare disrupts your sleep patterns to how many people prefer print due to a lifetime of habits.

A further reason is that the ebook is a stupid format. It doesn't take advantage of anything in the digital world, but is instead identical to printed books in every way. I wrote about this back in 2012 in "Lies, Damned Lies, and Ebooks".

And a final reason is that the tablets themselves failed to find the market many thought they would have. We thought the iPad would replace the bulky laptop computer. But instead, our smartphones grew in size, while laptops slimmed down to a much more comfortable size. In other words, the future of laptops was... smarter designed laptops.

But this is also the problem for ebooks. The smartphone is great for a bazillion things, but you can't really read a book on them. And even though modern laptops are brilliant, they aren't really that good in bed to read a book on.

We are back to square one. We still haven't invented the future book. And this is why sales have stopped declining. It's not really because the old market is coming back. It's more because we tried one thing (ebooks) but it didn't really work that well.

So, will we invent a new format (or behavior) and, if so, when? And when that happens, will the bookstores experience the same second crunch that we saw with Kodak? Or is this it? Is what we see today how it will be for all time to come? Will the printed book live on forever commanding 70% of the market?

As a media analyst, I have no doubt that it's the former, but it might take a while before it happens... maybe even a generation.

However, the real shift is already happening. As the Association of American Publishers wrote:

That's an important element of the future. Tablets failed to transform the market for ereading devices, and smartphones are too small. But audiobooks don't care about the format of the screen. They can be used anywhere... even via wearable tech.

Similarly, we are seeing so many amazing things from the digital natives in relation to storytelling, which is transforming not only the format of a book but also its very definition. I wrote about this 6 months ago in the Plus article "Future of Books Is Not As Interesting As The Future Of Storytelling".

And this is really where the future is happening. It's coming from outside of your current market where it will gradually command more and more of people's attention, time and money.