One thing I really can't stand about the media is when journalists exaggerate to the point of lying. Sure it attracts attention, but it's no surprise that newspapers score similar to politicians in terms of trust.

Another thing I can't stand when journalist do this without actually realizing it, because they are 'too busy and too stressed' to spend the short amount of time it takes to learn the real cause.

This 'publish quickly, think later' approach to publishing is one of the key reasons why people are getting fed up with the news.

One example: Yesterday, several newspapers reported that "Tesla Motors Shares Crash After Video Of Model S Fire" ...and below is the Tesla stock performance for 2013. 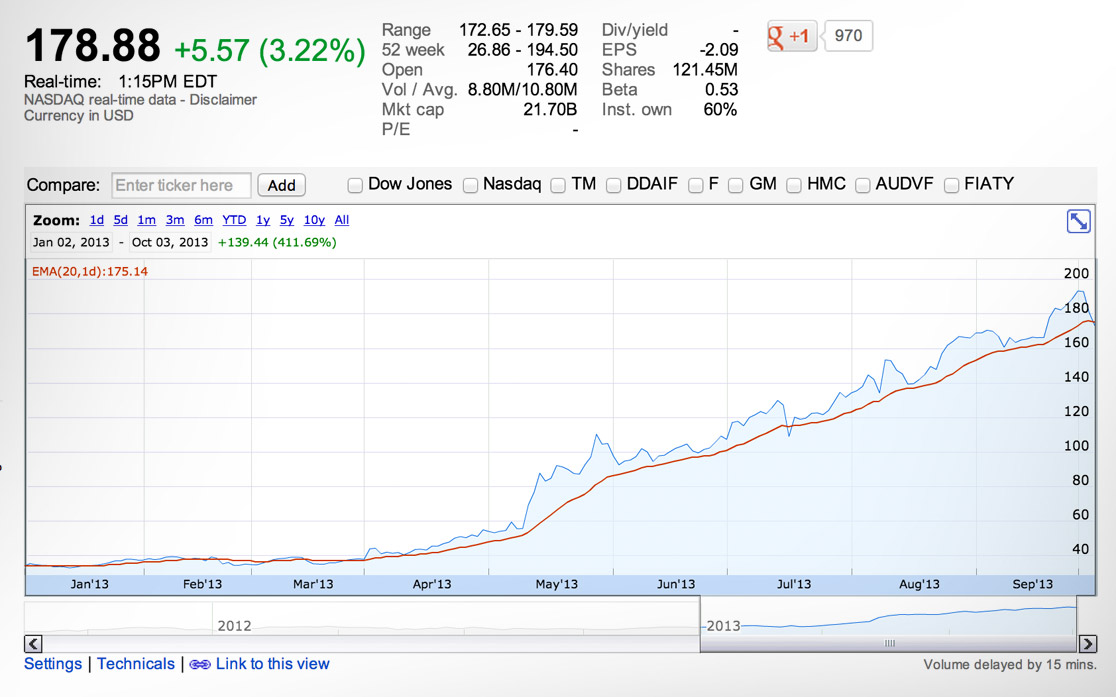 Did the stock crash? Well... You tell me.

And then you learn that the real cause of the drop was more likely to have been caused by the financial service Baird who put a Hold rating on the stock. They did this not because of the fire, but because they believe that Tesla amazing stock performance is about to peak and level out. (http://goo.gl/Q6AQNQ)

Of course, this makes for much more boring news than "Tesla shares crash after car catches fire".

The point is that we have two problems here:

First, the focus on quick and shallow reporting is causing journalists to completely miss the mark. If you just look at the Tesla stock per day, it does indeed look like it crashed. And by not spending any time investigating the cause, it is easy to get caught up by a video if a car catching fire.

Secondly, This lack of insight makes the journalists incompetent. Not as persons (all journalists I know are pretty smart), but definitely as the result of their work (because they forgot to use their 'smartness' since there were too busy). This leads to misleading news, lack of trust... and a struggling news industry who can't seem to figure out why people won't pay for their stories.

I love the news industry. I really do. But it pains me to see so many respectable newspapers increasingly chase after the lowest form of news possible.

Not only does this mean you focus on creating average news for average people (a terrible strategy), it also means you become just one of millions of sites venturing into the gray nothingness.

What is it that makes you unique, distinct, and creates long term loyalty and trust on your news brand? It's certainly not articles like the one about Tesla.