One example: Gawker recently announced it had reached 97.5M uniques across its sites, thanks to what Nick Denton described as:

September's surge was mainly down to kick-ass editorial, especially the speedy and skillful repackaging of Casey Chan at Gizmodo and Neetzan at Gawker.

I don't exactly know what Nick means by 'repackaging' but it appears to me to be mostly about quickly reposting stories from other sites. Now, Gawker does give credit, and they usually do it well, but the reality is still that the creators earn almost nothing but has to do all the work while Gawker earns everything but only has to spend a few minutes reposting it.

When it comes to the attention economy (the one where pageviews and advertising rules), the creator loses.

But this only half the problem. The other half is that the act of crediting/quoting often leaves the creator missing. The worst examples of this are when newspapers download a video from YouTube, uploads it to their own sites, put their own ads in front of it, and the credits it "source: YouTube".

But usually people don't leave out the creator intentionally. It's just something that happens as things move from one poster to the next.

One example is this one: Yesterday the always funny Laura Jul posted this quote: 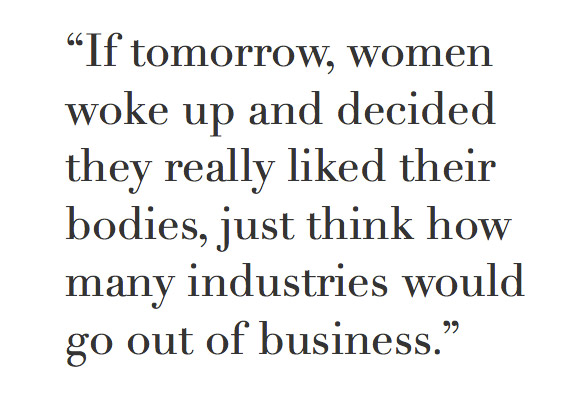 It's a great quote, but as you will notice, it doesn't say anything about who said this, nor when or in what context it was said. In other words, the creators have disappeared.

Of course, Laura, being a good netizen, added a "via" link. This link points not to the creator of the quote, but merely where she found it. In her case, it was via "Laila La La" on Pinterest.

But Laila La La isn't the creator either. She had only repinned it from Michelle. 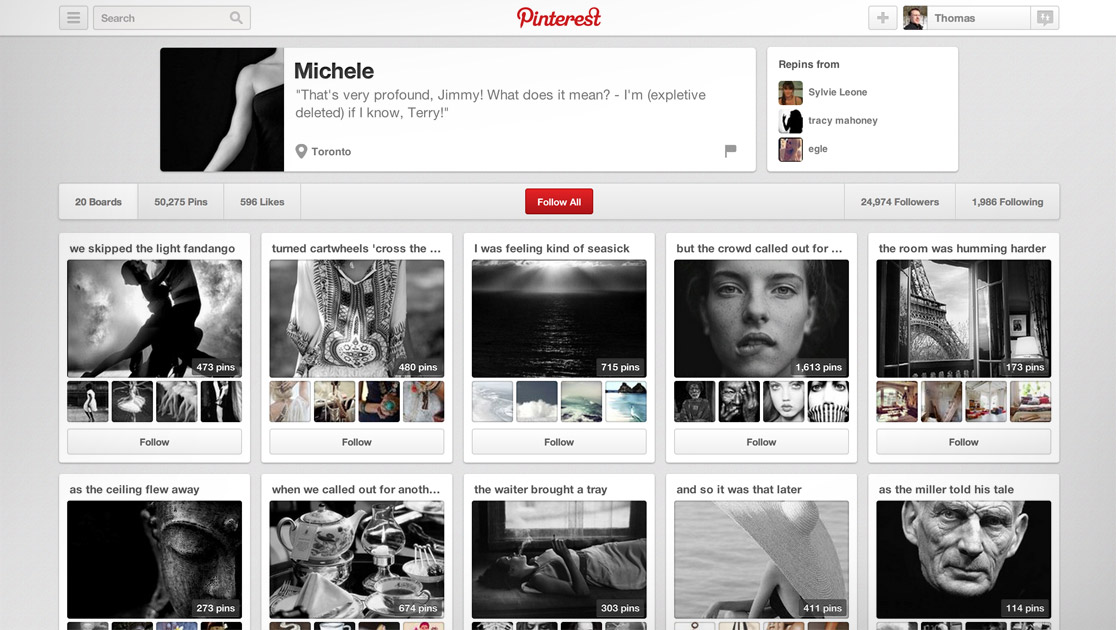 And when we look through Emma's boards to find the original pin, we discover that she was indeed the person who originally uploaded it.

In other words, we have this: 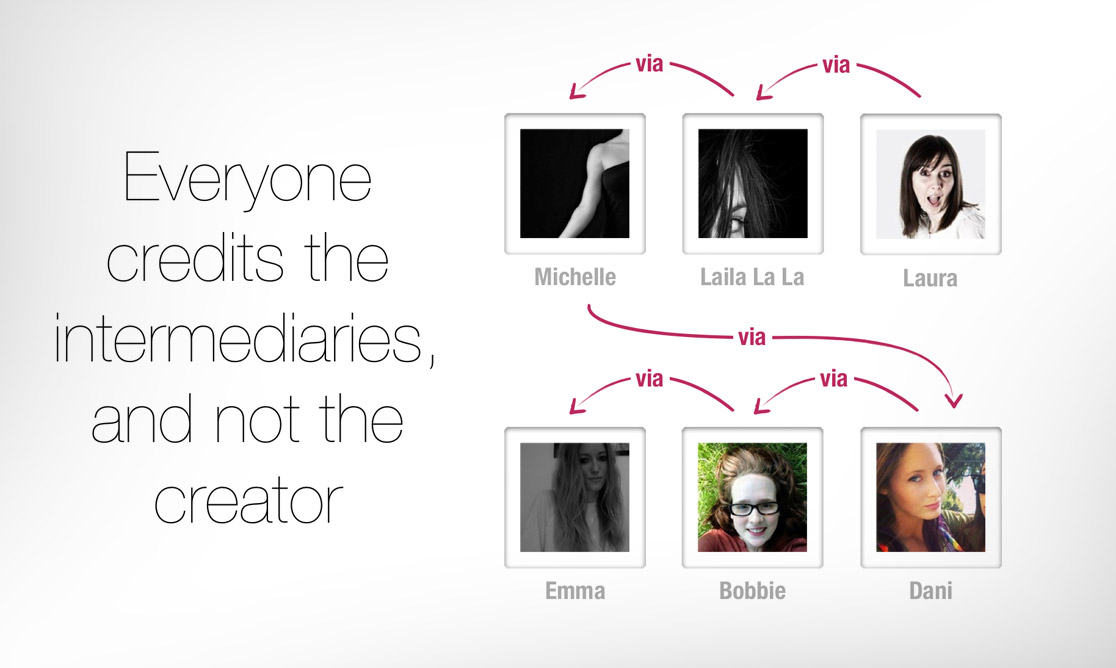 Each person is giving credit to the person who came before. And neither Laura, Laila, Michelle or Dani has any idea whom Emma is, nor that she was the one who uploaded the quote in the first place.

It's "death by quoting".

Think of the implications this has for brands. If you upload an image as a brand, once people start to repin it, the credit is given to the repinners, and none of them will have any idea that it came from you.

But what about Emma? Is she the creator? Well... not exactly. She probably found the quote on some other sites, maybe on Tumblr. So who is the creator?

So we have two problems here:

The first problem is that the creator is lost in the mix. Gail's quotes have been shared by millions of people, and none of them know that it came from her. Instead, it's the intermediaries that profit, whether it's Gawker getting 97M unique, or social networks and blogs.

The creators who are doing all the work loses to the intermediaries who profit.

I don't mean any disrespect to any of the people I have mentioned in this article. It just served as a good example.

The problem is how we give credit. Instead of giving it to the creator and keeping the link intact to the original source, we give credit of the intermediaries whom's contribution was only to reblog it.

This has a dangerous financial impact on the publishing industry in which companies like Gawker and Buzzfeed profits while the creators don't. This, in turn, lowers people's interest to create something new, which creates the shallow superficial type of content that is prevailing today.

And we see it everywhere. This is why newspapers credit "source: YouTube", why Techcrunch credits "The Verge" for information that really came from a startup, and why social networks and blogs are overflowing with information snippets from whom we have no idea who created in the first place.

One example is my post about Blackberry. I read about this on four different sites, but three of them merely repeated what Blackberry had stated in their press release. Only Wall Street Journal added something new, which was why I also credited them before adding my own comments.

The same is true for startups building social platforms. What Pinterest is doing is completely unacceptable. They have designed repins in a way so that the original uploader gets no credit at all. All credit goes instead to the repinners, who in turn have no idea where something really came from.

As a social startup, you have a responsibility to maintain the credibility of the people who create.

And the same goes for you as a person. When you are retweeting or sharing someone's tweet. RT the creator, not the retweeter.