Compete and The Rumored Death of Digg

You might have heard the stories about Digg losing 50% of its traffic in just one month, based on data from Compete.com. They are all asking the same question. Is Digg dead? (no it isn't)

But is Compete.com a reliable source of statistics? (the answer is no).

Compete.com works by "having have a diverse sample of 2,000,000+ U.S. Internet users that have given them permission to analyze the web pages they visit and ask them questions via surveys."

In other words, they are basing their statistics on US only traffic, based on 0.65% of the US population, via the desktop browser (not mobile etc). They are measuring web traffic the same way as companies like Gallup are measuring pools in politics.

General "polls" works fine when it comes to measuring something that everyone is influenced by. Like finding out what people think of Obama as President. But, it gets less accurate the more niche something gets.

To test out my theory, I decided to see how Compete stacks up against baekdal.com.

I compared the traffic reported by Compete, Google Analytics (US and worldwide), my direct server stats, and Quantcast - another stat source commonly used by the media.

All of them show a similar trend (apart from Quantcast, which is just useless), but Compete generally fluctuates between 26% to 71% less traffic. And in April 2010 it reported more traffic than Google (which is impossible).

This is a dramatic level of uncertainty.

Looking at how Compete handled itself compared to this site, I can only say that they are not a reliable source of traffic. Compete might illustrate a trend (As they are usually following the same pattern), but the fluctuations are too big to be used for any short-term analysis.

You simple cannot tell whether this is real, nor if the numbers are anywhere close to a site's actual traffic.

But, is Digg dead?

Let's look at it from another perspective. Some suggest that they are losing traffic because they axed the Diggbar, or due to changes in Google Search algorithms That might certainly be the case.

We know that the Diggbar "inflated" their traffic stats with about 20% unique users. So killing the Diggbar is likely cause a direct drop of 17% (but it is questionable if Compete would measure it as such).

About Search, then Digg is basically a link farm (although one of the good ones), and it is very likely that Google would lower the ranking of Digg, in favor of proving results directly to the pages Digg links too.

But, when you then compare Digg with Google's own Google Trends, you still see a drop (of 30%), but it happened a month before Google changed their algorithms. It still doesn't explain anything we see in the graph from Compete.

There is however, a trend going on here. It appears that Digg is loosing traffic, although it is most likely not a sudden drop, but a downward sloping curve starting around October 2009. And they have probably lost about 30% of their traffic.

This would explain the changes in management. The focus on trying to create a new digg platform, with a completely new focus. All things that companies do to stop a negative situation from evolving.

This also explains why Kevin Rose is back in charge. Digg wasn't moving forward. It was disrupting its users (with the diggbar), and it was getting more and more irrelevant compared to what is happening on Facebook and Twitter.

Kevin probably wanted things to move forward again, and to get out of the status quo it has been stuck in for years.

But really... is Digg dead?

No, far from it. Digg's new strategy is absolutely the right one. Digg used to be a site filled with links from all kinds of people, ranked by the number of diggs. This creates a very active site, but it also creates a ton of clutter and noise.

It also creates a one-sided audience, because people will naturally be attracted to a certain category of topics, and as time progresses, digg would be forced in a single direction. That is why we, today, see a site that is heavily focus on techies and their interests.

What Kevin is doing with Digg v4 is to get rid of the clutter and noise, and open up the site for every topic on equal terms. Instead of showing links from everyone, you will only see stories and topics based on the people and companies you follow directly.

That is a huge plus for relevancy.

They are turning Digg away from being a ranked bookmarking site, into a social link aggregation platform. Digg is no longer competing with Reddit, they are now competing with Facebook and Twitter.

Think of it as the concept of Twitter, but for link aggregation.

Here is a video explaining it in a bit more detail.

Digg can essentially become the social alternative to RSS feeds, and finally bring social into the mix of link aggregation (the biggest shortcoming of RSS today). You can, as a publisher, automatically submit articles to Digg, and link them to a Digg user account. You can thus use Digg as an extremely effective platform for allowing people to follow your stories from a social networking perspective.

Of course, you can also do that on Twitter and Facebook, but your stories will be ranked based on the influence of your followers. That is a big deal, and that makes it more interesting to use Digg as your personal news aggregator. 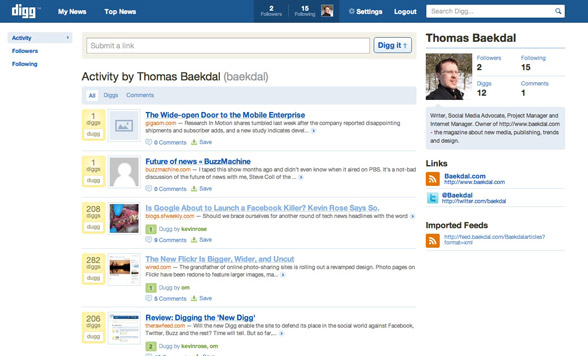 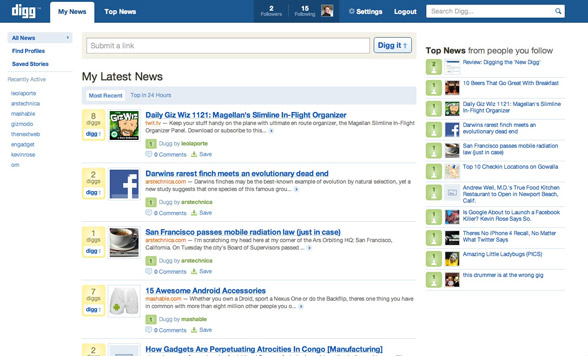 The new Digg is also what Google Buzz should have been about. Google made a humongous mistake, when they decided to focus their social efforts on yet another stream. They should have taken the existing streams and use their power and skills to make it relevant.

That is what Digg is doing. They are taking all these links that people share every day, and creating a way for us to get the most relevant ones, from the people we care about the most.

If Google had done that with Google Buzz, it would have been an instant success.

Digg's new future won't be easy though. The change is dramatic, and is likely to alienate most of their core users. That is a problem in the short-term, but also a necessity for long term growth.

They are also going smack up against Facebook and Twitter, which mean that they suddenly have to get really serious about how they do things.

When you are just a bookmarking site, life is generally easy. It's just about data, and semantics. But, when you are moving into the social sphere, the power shifts to be about people, and how they feel about what is being shared.

That is a completely different mindset and I'm not completely sure that Kevin understands this. He seems to understand the social relevancy, but I think he may be looking at it more as a feature.

Finally, for this to work, you need to first build up a network of friends and publishers, and that is going to be very hard.

Why maintain yet another friend network? It is already far to difficult to get all your friends to see the things you share on Facebook and Twitter.

The upside here is that they are using the Twitter model of followers, and not Facebook's two-way-friending. Meaning that you can get relevant content from other people, without forcing them to also follow you.

Digg is not dying. It is going to get really nasty in the short-term, but they have a very interesting future. They are turning themselves into the best social platform for sharing links.

I didn't think much of the old digg. It was too noisy, and rarely provided any value. The new Digg, however, looks to be a great place to get relevant content based on what I like, shared by people I want to follow.

And as a publisher, it could be even more powerful than Twitter and Facebook, because apart from your content being "retweeted," it will also be ranked based on the level of sharing - between people. That's big!