Let's Calculate What Publishers Could Earn from the Google 'Snippet Tax'

As a media analyst, I'm getting really tired of listening to publishers complain about how Google is using news snippets in Google Search (and Google News), and how several publishers are trying to push Google to pay a 'snippet tax'.

There are two reasons why this is so tiring.

Let me explain why, including trying to calculate the actual revenue potential.

It makes no sense

Newspapers argue that Google should pay to use a snippet from a newspaper because they are making money from it. 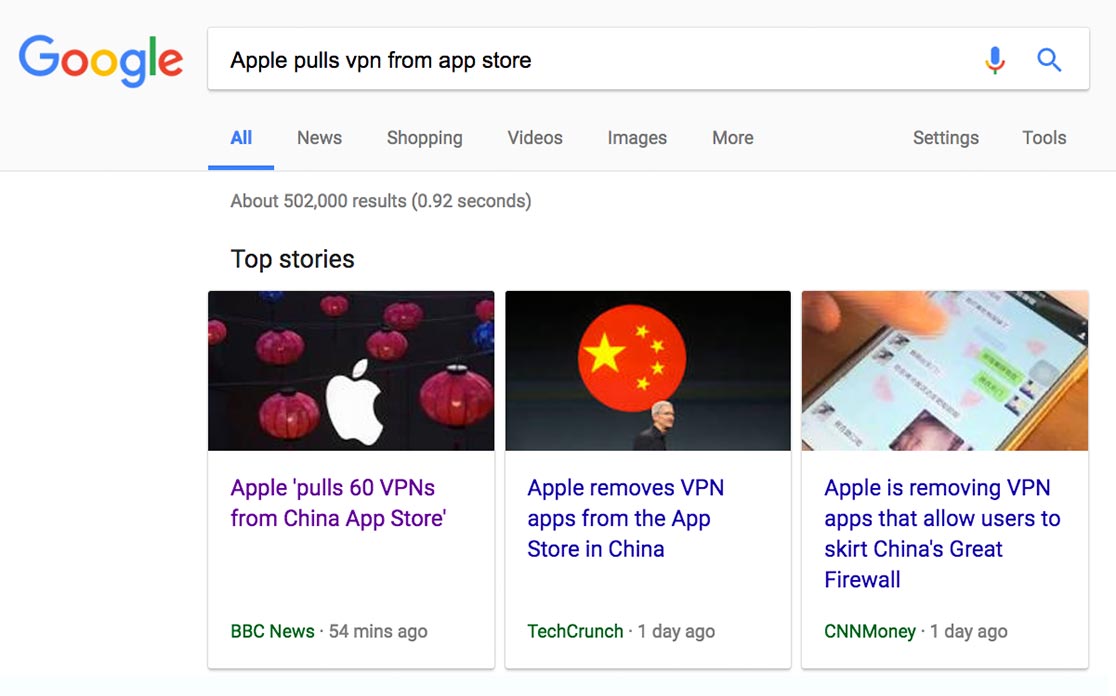 From a general perspective, I actually kind of agree with this. As a publisher myself, I do think that the 'creator' of content should earn most of the revenue that content generates, regardless of where that happens.

But this is not really what the newspapers are saying, because they are only arguing that they should be paid, not everyone else.

In other words, newspapers argue that Google should pay them for using their content as a source, but the newspapers themselves don't have to pay when they do the same thing.

We see this every single day.

A journalist will write a story based on something they found somewhere else, but do they pay that source for the quotes?

For instance, occasionally, a journalist emails me to ask questions for a story they are writing, and (depending on the topic) I sometimes reply. I don't get paid for that.

So, why should Google pay the newspaper for linking to that story in Google Search, when the newspaper isn't paying its own sources?

And why should Google only pay newspapers? Shouldn't they pay anyone, including all the bloggers, the digital natives, the scientists who published a research study, etc?

This whole argument makes no sense. Either the rules apply to all, or to nobody. The idea of creating a law that only applies to newspapers illustrates a level of entitlement that is simply shameful.

There is no money to be gained here

The second problem is even bigger, and that is that even if we managed to turn this into law, it still wouldn't change anything.

The reason is, publishers in general don't understand how Google works, or how they make money.

So, let's calculate the actual revenue potential newspapers could possibly get from this 'snippet tax'.

First of all, Google is big, in fact, the current estimate is that Google is serving up between 1.5 to 2 trillion searches per year.

That amounts to 125 billion searches per month.

Google also makes a lot of money. In the last quarter, it made a stunning $26 billion, of which $4.1 billion was profit.

But, of course, this is for Alphabet as a whole (Google's parent company), and across everything Google does. If we look at only the money Google earned from its own sites (Google Search + YouTube), that results in $18.5 billion for the last quarter... or $6.2 billion per month.

Of course, we then have to take out YouTube, but Google doesn't detail how much money goes to each. If you ask the music labels, they argue that almost all the money is going to YouTube, whereas news publishers argue it's all going to Search.

I have no idea. But let's estimate that 75% of Google's own ad revenue is from Google Search and the rest is for YouTube.

This means that Google Search has a revenue of $4.65 billion per month, of which about $700 million (not billion)is profit per month.

Now, we can take the $700 million in profit and divide that by the 125 billion searches to get the profit per search query.

Obviously, I'm making a lot of assumptions here because we don't have exact numbers for Google Search alone, but this is the kind of figure we are talking about.

You see the problem here? Publishers think Google is making a lot of money, and they are as a whole. But on a per search basis, the profit is negligible. They just have immense scale.

So, now let's look at a publisher.

If I look at one of the largest newspapers in my country, Politiken, they say that they have a total of 20 million pageviews per month(across mobile and desktop sites, but excluding apps).

But this isn't a real number, because this assumes that every search view is worth the same (which it isn't) and that Google will hand off all of its profit to newspapers (which it won't, nor would that be reasonable to demand).

The way Google makes money is through searches for things brands are targeting. Essentially the more brand-friendly and targeted a search query is, the more ads it will have.

Let me give you a simple example:

Here I searched for 'iphone battery explodes during charging': 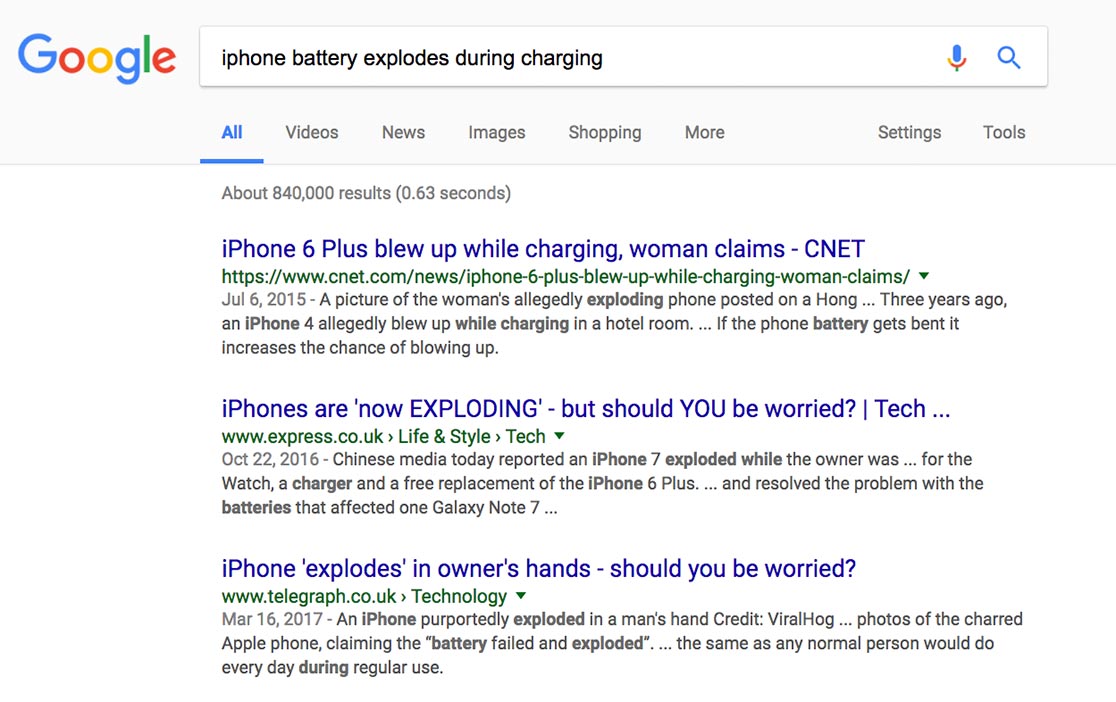 Notice how there are several links to news articles, but also that there are no ads.

Meanwhile, if I instead search for "iphone battery", now I get a ton of ads. 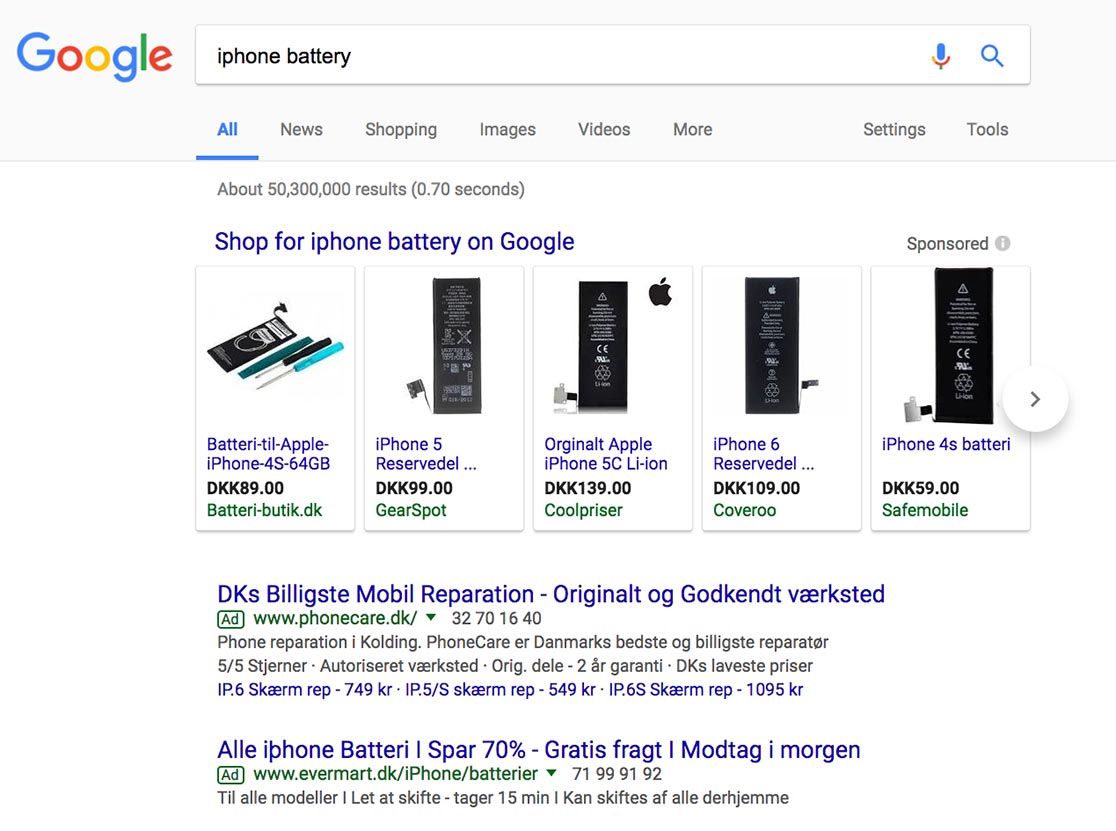 Notice how both queries use exactly the same words, but because one query is far more 'brand-safe' than the other (and thus would benefit brands more), Google only places its ads on that.

This is the reality of how Google works. Newspapers generate very little money for Google.

So how much money do they generate? Well, we don't know. But let's assume that news queries are only monetized 1% of the time, this would mean that a publisher like Politiken would only earn Google... $201.

Obviously, Google isn't going to pay publishers all of that, so let's assume a 70/30% split. Meaning, the total possible 'snippet tax' payout, for a publisher with 20 million pageviews, would be $140 month.

But, "wait-a-minute", you say. That's because I'm talking about profits. Google should do a revenue split instead.

Okay, so if we do the same calculations based on revenue, we get this:

This gives us a total payout of... $934 per month. And even if 10% of the search queries were instead monetizable, that's still a negligible amount of money.

Why are we even having this discussion? The whole idea about a Google snippet tax makes no financial sense.

This is a complete waste of everyone's time.

As Veit Dengler, former CEO of NZZ-Mediengruppe, tweeted a few days ago:

No. Forcing "Google/Facebook to pay for showing short quotes from copyrighted content" is ridiculous; snippets are not a product.

Publishers need to focus on content users are willing to pay for; hard, but it's doable. Charging for snippets is barking up the wrong tree.

He is completely right.

Even if publishers managed to convince EU politicians to do this, there is no money to be gained here. And all you do is destroy the openness of the internet.

Linking to content online is an integral part of why the internet exists. It's what makes it work.

First of all, that's not entirely true. And, secondly, in today's world, you can say that about many different things. Again, we come back to this insane level of entitlement that exists in the media.

Why should newspapers, who are often merely acting like the bringers of news, be paid more than bloggers, scientists, YouTubers, independent researchers, or other creators?

That makes no sense.

Or to put a more personal perspective on it, as a media analyst I spend a lot of time writing in-depth articles about the media. Why should a newspaper be paid more for doing that than me?

The answer, of course, is that newspapers shouldn't be paid more than anyone else. So please drop this entitlement nonsense that we hear all the time. It's not helping and there are far better things that we could focus on.

My advice to you is to drop this whole discussion about a Google snippet tax, because even if you made it happen, it would cause a lot more harm than good... and you still wouldn't make any real money.

This doesn't mean Google and Facebook should just be able to do whatever they want. But focus on something constructive rather than wasting everyone's time with something that makes no difference.

The primary problem isn't how we can earn a few extra pennies from low-end engagement. The focus should be on how to build real value from things that have a big impact.

Let's do that instead.